Just about 11 months ago this was me: 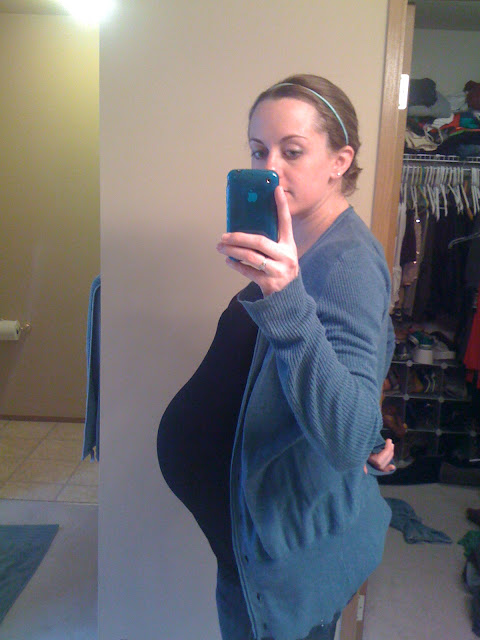 I believe that picture was taken on your due date (April 26, 2010 aka my 28th birthday!). It was also my first day of maternity leave. I was very proud to have worked right up to my due date...little did I know I could have worked for another full week!

Here is the story of your birth day:


My due date came and went. I was finally on maternity leave and enjoyed a couple of days relaxing at home, but I was so anxious for your arrival. Lots of long walks and some very spicy food were not doing the trick, I had not had one contraction. My doctor informed me that she would like to induce labor Tuesday morning, May 4th, 2010.


This was a hard decision for me as I was really really hoping not to be induced. Induction can lead to more risk of c-section if your body isn't ready for labor, contractions can be more painful because they are brought on by medication, etc. etc.  Basically I didn't like the idea of forcing my body to do something, I wanted to wait until I went into labor on my own.


After a LOT of discussion we decided that I would go forward with the induction. I was so scared about making the right decision for us, I just wanted to make sure that you would be ok.

The day of the induction we were suppose to arrive at the hospital at 6 am, but about a half hour before we were going to leave we got a call that the hospital was super busy and our time was being pushed back to 7. I was nervous and excited and just so very very ready to meet you.


The induction (pitocin drip) probably started around 8 am.  I have a major phobia about needles and the idea of being hooked up to an IV throughout the labor completely freaked me out. I understand why some women choose to give birth at home or without these types of interventions, but I also felt at ease being at the hospital and knowing that if anything went wrong you would be ok.


I guess everyone has to find the balance of what they need in order to have a comfortable birth experience. After the contractions started I didn't even notice that tiny needle.


The doctor broke my water around 1 pm and then I started to be able to feel my contractions. I labored for many hours and it was painful but bearable with moving around and breathing, walking etc. Your dad walked the halls with me, pausing every few feet so I could lean against the wall during a contraction.


I was dealing with the pain really well and I felt I could make it through without pain medication. I had mixed feelings about getting an epidural. Mostly I wanted to continue to move around and I wanted to be able to feel the natural sensation to push when the time came.

Your dad and Nani stayed with me the whole time and Papa, Auntie Em and Uncle Ben were in the waiting room far into the night. Things were progressing slowly and the nurse kept turning up the pitocin level trying to get me to dilate further.


Around 8 pm I was only about 4cm dilated and the pitocin was making such strong contractions that they were overlapping. I had been dealing well with the pain by breathing through them and trying to relax and regroup in between, but now I had no break and the pain started to become overwhelming. The nurse told me they would have to turn the pitocin up as I was not dilating. I couldn't imagine how I could breathe through the contractions if they were going to become stronger and continue to overlap.


At this point I decided to try the epidural in the hopes that they would be able to up the pitocin medication and I would begin to dilate. I think in the end this was the best decision because after breaking my water, they wanted to get you out in a certain amount of time to avoid the possibility of infection.


If I had not progressed any further I was headed for a c-section, which is a major surgery that I did not want.

I asked for the lightest epidural so I could hopefully still move around a bit and feel when it came time to push. It took the anesthesiologist 7(!) attempts at different points in my back for him to place the epidural (this was probably the worst part of the whole experience, especially trying to stay still and not shake through the contractions). I thought your dad was going to punch the guy if he stuck me one more time, and your dad is not a violent or angry person by any means.


The anesthesiologist finally got the epidural in around 9:30 pm and I was able to get a bit of rest. I could still feel a lot of pressure, but the pain was no longer constant and once again I could breathe through each contraction.

At this point the room was quiet. I was laying in the bed on my side and suddenly with each contraction I could feel you moving lower. It was an amazing moment for me because only you and I knew what was happening. No doctors were around, everyone else was asleep, but you and I knew it was time.

Everything progressed pretty quickly after that, by 12:30 I was 10 cm and started pushing. We had a really awesome nurse during the last part of delivery. Her name was Angie and she was a no-nonsense woman. She made me feel like I was amazing and I had absolutely no fear. I was so happy because I could move positions and feel the sensation to push, but the pain was dulled, which is exactly what I had hoped for.


Pushing was actually my favorite part of the labor process, pushing helped with the pain.  Trying not to push (to rest through a contraction) was basically impossible. I had enough energy and I was so ready to meet you that I pushed with every contraction for 2 hours straight.

At 2:30 the doctor came in and at 2:44 am on Wednesday, May 5, 2010 I delivered a 9lb 6oz baby girl. The doctor literally had me reach under your arms and pull you out (which I thought would be weird, but instead was amazing). You were finally here.


I have to admit after I saw your beautiful little face, the first thing I did was look to make sure you really were a girl. I still thought it was too good to be true that I got my girl on the first try.


They put you on my chest and the same thing just kept running through my head: "so it was you who was in there all along!" Even after they took you to check you out and weight you I just kept looking at your face, I couldn't believe I could finally see you. My Lily.

We were at the hospital until Thursday afternoon and then they sent us on our way. No more nurses to help us or tell us what to do, we were on our own. I have never felt more scared and excited and nervous yet calm in my life. We were responsible for this little being and now it was our job to help her grow and flourish.


I couldn't get over the fact that you were seeing everything for the first time. Even if most of it looked liked colored blobs to you. You had never seen a tree or the sky. Seeing the world through your eyes has been one of the best things about being your mom.

So that's our story, the beginning of everything.

Email ThisBlogThis!Share to TwitterShare to FacebookShare to Pinterest
Labels: a look back, mamas are people too, milestones, pregnancy